Fairfax Cryobank is operating and available to answer questions! Call 1-800-338-8407 to order vials and receive 6 months of free storage!

Preconception carrier screening for inherited genetic disorders is designed to identify couples at risk for passing on inherited genetic diseases to their children. The major societies representing health professionals in reproductive medicine (the American Society for Reproductive Medicine [ASRM], the American College of Medical Genetics and Genomics [ACMG], and the American College of Obstetricians and Gynecologists [ACOG]) have recognized the importance of carrier screening in preconception and prenatal care. This process of genetic carrier screening is also important for the thousands of couples each year that will need to use donor sperm or donor eggs (donor gametes) to build their families. Like all prospective parents, those who rely on donor gametes want to conceive healthy children. The donor selection process gives these parents the opportunity to minimize risk of recessive disease inheritance by avoiding donors who carry genetic changes that are incompatible with the reproducing parent.

Of the approximately 24,000 genetic disorders that have been described, nearly half are due to recessive genes. In recessive genetic diseases, both parents must be carriers (i.e., they are clinically normal but have one alteration of a particular gene that affects it’s functioning), and both must pass the abnormal gene to a child in order for that child to be affected. 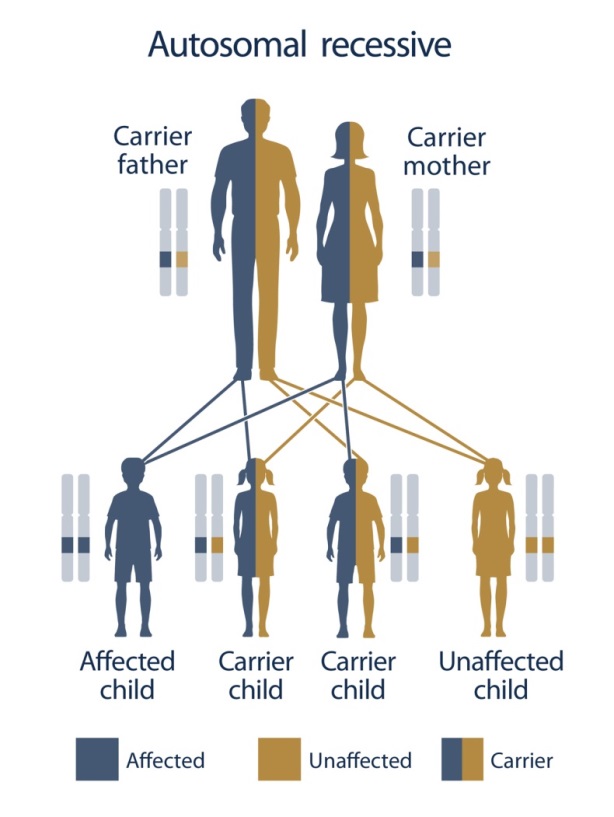 We all carry a number of recessive gene changes which do not produce symptoms due to the fact that we have a backup working copy of the gene and therefore the correct gene product is made. In a study performed many years ago, it was estimated that all of us carry 5 or more recessive genes that could lead to a child with a serious medical disorder if we reproduce with a carrier of the same gene. More recent studies looking at data from DNA sequencing suggests that in fact we likely carry many more recessive gene changes than the initial study suggested.

The first wide-spread recessive genetic disease screening programs were based on single disorders that had a high prevalence in a specific ethnicity. Early attempts at carrier screening for sickle cell disease in the 1970s pointed out the difficulties in establishing population-based genetic screening. The National Sickle Cell Anemia Control Act of 1972 aimed to reduce morbidity and mortality from sickle cell disease which over 8% of the African American population was estimated to carry. This well-meaning program was marred by inadequate training, poor methodology and lack of genetic counseling. The participants (and their insurance companies) did not understand the difference between being a carrier of sickle cell disease and being affected with the condition. Carriers were felt to be “defective”, a false perception that persists today for gamete donors! A successful community-based Tay Sachs disease screening program was begun in 1971 for the Ashkenazi Jewish population. Wide implementation of this program has significantly reduced the incidence of Tay Sachs disease in this ethnic group, with the majority of affected infants currently being from other ethnic groups. This fact points out the limitation of ethnic-based screening in that these disorders are never truly limited to one ethnicity. In addition, mixed ethnicity, adoption, and unknown ancestry complicate accurate reporting of ethnicity. In 2001 ACOG initially recommended offering cystic fibrosis screening for Caucasian individuals and those couples with a family history of cystic fibrosis. By 2011, the guidelines had to be changed to recommend screening for all women stating that it has become increasingly difficult to classify individuals with cystic fibrosis into distinct ethnic categories.

The cost of testing was also a limiting factor in determining the extent of genetic screening. Ten years ago, testing for cystic fibrosis and several other genes could cost as much as several thousand dollars per gene. Today, with the development of new high-throughput DNA sequencing and genotyping techniques, the cost of sequencing hundreds of genes is less than 500 dollars, weakening the economic rationale for restricting any screening protocol to select groups of people or genes. As the cost of genetic testing continues to decrease, justifying the omission of rare diseases from carrier screening panels becomes increasingly difficult. Rare recessive genetic diseases are collectively present in 1 in 280 births, which is more common than Down syndrome. Expanded Carrier Screening is the term that is currently used to represent the current screening panels of 200-300 genetic disorders which are available through many commercial laboratories

So we therefore come to the question of why donors of gametes are treated differently than reproducing couples. All sperm and egg banks carry out some form of genetic screening in their applicant selection process however, the extent of DNA-based genetic screening varies widely among gamete banks. As noted above, in most but not all programs, carriers of recessive genetic diseases are excluded from being donors. This is based on the false assumption that a donor must be “perfect” and therefore a carrier of a genetic disease is not acceptable. This is not a rational argument as we are all carriers of recessive genetic diseases. What matters is only which gene is involved and whether the reproductive partner  is a carrier in the gene for the same disease as the donor. Otherwise they will be totally compatible from the genetic risk standpoint. It is intuitive that as screening becomes more and more effective that if all carriers are excluded, eventually there will be no donors available. Also a donor who may not be compatible with recipient “A” would likely be totally compatible with recipient “B”. Adopting this approach would dramatically increase the number of available donors for selection.

In order for this type of program to work, all donors should have Expanded Carrier Screening. The reproducing partner (female for donor sperm, male for donor egg) would get their own genetic screening done and submit it to the bank who can then supply a list of all donors who are genetically compatible. This would include donors who are carriers of conditions different from that of the submitted reproductive partner as well as donors who carry no genetic diseases in the testing panel.

In the end, it is a win/win situation for all. Currently over 30% of donors are excluded on the basis of being a carrier of a rare genetic disease. These would remain available to recipient couples with no risk for offspring provided that they are not carriers of the same conditions as the donor.

Genetic testing will continue to be more comprehensive over time as techniques for gene sequencing continue to evolve. Likewise the selection criteria for gamete donors also needs to evolve as do the education and counseling of couples seeking gamete donors to build their families.

"An Introduction
to Family Building
with Donor
Insemination"
Download Now

"The Top 5 Tips
for Picking Your
Ideal Donor"
Download Now

Match your partner, yourself or even someone famous
to our donors.
Fun video too!
find out more