Donor Information: As part of the screening process to determine donor eligibility, sperm banks gather a great deal of family (3 generations) and personal medical history. In addition, while donating, donors are given physical examinations every six months, and are also tested for a wide array of infectious diseases at least every six months. Most sperm banks also perform chromosome analysis (karyotype) and test for many common genetic diseases such as cystic fibrosis in the general population, and genetic conditions common to certain ethnic groups (e.g., sickle cell trait for African Americans).

Donors are interviewed extensively to check for consistency and accuracy of reported information. In addition to the screening and testing of donors used to establish medical eligibility to donate, sperm banks also offer other “soft” information on its donors such as childhood photos, personality tests, audio interviews, staff impressions, and personal profiles. It has been said that the amount of medical and personal information on an anonymous donor greatly exceeds the knowledge most people have of a known partner. 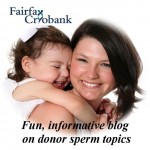